Having bumped into memory, time learns its impotence.
Joseph Brodsky

One of many questions triggered by Silent Cranes: The Music of Mary Kouyoumdjian, Performed by Kronos Quartet and Hotel Elefant presented on May 12 in Roulette, is the fragility of the boundary between political art and overt political statement. A descendant of a family that suffered from the Armenian Genocide, Kouyoumdjian shares Sartre’s belief in committed art, and, as Sartre suggests, in her works she recovers this world “by giving it to be seen as it is.”

Striving to approach controversial issues through the arts is apt in the case of the challenging topic addressed by Kouyoumdjian. Indeed, it is more common to learn about a century-old tragedy of the Armenian Genocide by experiencing artworks created by the exiled descendants of Armenians, rather than by means of a history lesson. I came to know about it from Ararat (2002), a film directed by an Armenian-Canadian Atom Egoyan, that shares many images and themes with Kouyoumdjian’s work: pomegranates, Arshile Gorky, Turkish soldier cutting the stomach of a pregnant woman, Hitler’s infamous inquiry, 1.5 million killed.

Kouyoumdjian’s music is able to transmit state of madness, exemplified in two portraits of genocide survivors – composer Komitas who suffered post-traumatic disorder after his deportation to a prison camp, and painter Gorky, who lost his mother to starvation. Sea of Two Colors (2011) transports the listener to the realm of a restless soul of Komitas; flowing piano trills of the sea can also be heard as dark sinister clouds that cover once clear mind of a legendary composer and, with a brief moment of transfiguration, dissolve into eternity. Gorky’s voice in Everlastingness (2015) sounds completely detached from the accompaniment (reminding of Schumann’s songs), as the protagonist, consumed by his memories, lives in a fever dream beyond reality. 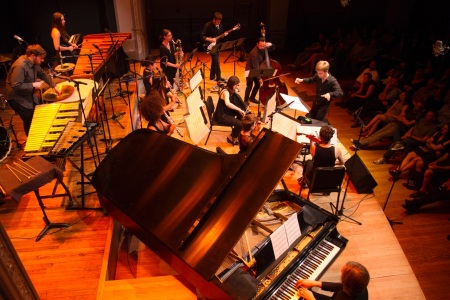 Gorky’s ruminations didn’t engulf me as strongly as the last piece performed by Hotel Elefant: This Should Feel Like Home (2013) indeed felt like contemporary Armenia the way I imagine it, with all the imprints of the past. Folk melodies, marching band, distant voices, Orthodox church singing returning time and again – these recorded sounds naturally blended with their own reflections on the piano, flutes, clarinets, and strings.

The title piece of the concert, a four-movement multimedia work performed and commissioned by Kronos Quartet, seemed somewhat less integrated. The first movement appropriately introduced some highlights of Armenian cultural heritage: projected images of beautiful rugs and ceramics, traditional costumes and architecture, an old recording of Komitas music and his portrait on the screen. In the following movements pomegranates decomposed into blood as my ears submerged into survivors’ testimonies, my heart pierced with every word. I felt that these words were too numerous and too literal, leaving the music no role other than an accompaniment to a documentary film. After so many atrocities copied from real life and pasted into the piece, some of the conclusions in the last movement seemed redundant. Shocked by the work’s content, I felt imprisoned by the abundance of words. One of my inner voices resisted the idea that the facts, the images, the narrative and the conclusions were all thrown into my face so literally, leaving no room for reflection.

I’ve always believed that art should favor the figurative over the discursive, especially in the music; but further reflections on Kouyoumjian’s Silent Cranes proved that its case might be different. The piece bears many similarities with Schoenberg’s A Survivor from Warsaw (1947), famously criticized by Adorno for its literal depiction of suffering. The subject in each piece is personal to both composers, both works are based on the reports of survivors (although Survivor has a fictional narrative and it is not clear whether any reports at all are quoted directly), and the text is clearly recited. Moreover, both works stress the role of memory, although, ironically, in Schoenberg’s, written right after the Holocaust, the narrator “cannot remember everything,” while Kouyoumjian digs a hundred years into the past to give voice to someone who “was young, but still remembers.” One more twist of irony: in 1915, The New York Times systematically reported on the mass murder of the Armenian people, while the atrocities of the Holocaust were not immediately disclosed. And what do we remember today? Perhaps the artists who address the events forced into oblivion by the political will, have a right to be fully committed (i.e. realistic) – this is the only way time can lose its battle to memory.

©2015 by Extended Techniques. All Rights Reserved.

One thought on “Mary Kouyoumdjian’s Silent Cranes: Remembering the Armenian Genocide in Music”